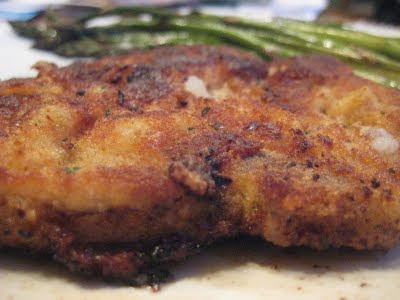 Grocery shopping has become one of my ultimate frustrations lately, as the prices of fresh meat/poultry/fish are nauseating! We've about had our fill of chicken, so I spent a little more than I normally would on a family-sized package of center cut pork loin chops. I figured the pork would be a bit healthier than red meat and ever since I tried breaded pork chops not that long ago, I have been in search of other variations. I realize I just posted a Parmesan Baked Perch recipe, so I apologize for the back-to-back "Parmesan-themed recipes", but I knew I couldn't go wrong with a recipe from Giada! My husband and I both felt that this recipe was a keeper and my son loved these chops so much that he even requested a second one! This is definitely another great, quick, weeknight meal!

Heat 3 tablespoons olive oil in a large skillet over medium heat. Add the pork chops, in batches if necessary, and cook until golden brown and the center reaches 150 degrees, about 6 minutes per side. Transfer the chops to a plate and serve with lemon wedges. 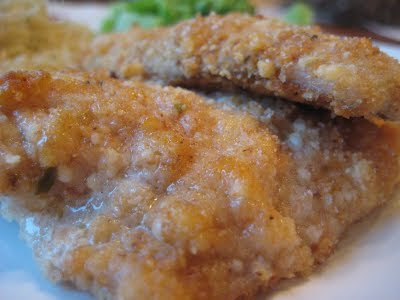 Well, I went grocery shopping the other day and as usual, only chicken was on sale, so as I was attempting to make room in my freezer for the random frozen items I purchased, I found a bag of perch. By no means am I a "food snob", but I'm finding it quite difficult to find frozen fish that I really enjoy. The bottom line is that nothing beats fresh fish--it's just hard to rationalize spending $7-$10/lb, while on a budget! I'm hoping against hope that trout or salmon goes on sale in the near future--not only because I'm desperately craving them, but because I have a couple of REALLY good recipes to share and they won't be near as good on frozen fish. As far as this recipe is concerned, I actually was pleasantly surprised at how flavorful the fish was and it was SO easy! Another recipe I will be adding to my rotation, especially when I'm in need of a quick weeknight meal!

In a shallow bowl, combine the bread crumbs, Parmesan cheese, paprika, oregano and lemon pepper seasoning. Brush fish fillets with butter, then dip into the crumb mixture. Place in a greased baking pan. bake, uncovered, at 500 degrees F for 10 minutes or until fish flakes easily with a fork.

Source: Adapted from allrecipes.com
Posted by Rachel at 1:38 PM 4 comments: 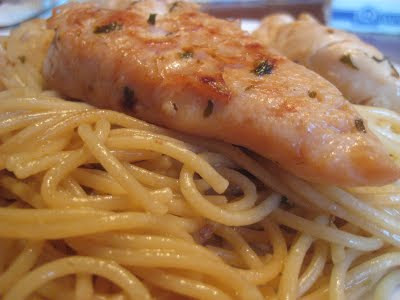 First of all, I seriously have every intention of posting some beef recipes just as soon as our local stores have reasonable prices! I can't quite psych myself up to spend $3/lb for regular ground beef...not even ground chuck! Even chuck roast has been $4-ish a pound...RIDICULOUS! Chicken happens to be the only thing on sale these days and I have to stick to my budget! I am so very proud to announce that my husband got straight A's this semester, so this was our celebratory meal in his honor :) Now, we just have to wait another few weeks to find out if he gets accepted into nursing school to start this Fall. If he receives an acceptance letter, I'm most definitely splurging on some good steaks!!! I also will remain on the hunt for quick weeknight meal ideas, because I'm hoping to work a ton to sock away money for next semester--if anyone has any ideas, please do share!

As for this recipe, I found it to be very simple to prepare and was a huge hit with my family. My husband polished off his plate and I think he took the leftovers for work today and my son requested seconds the night I prepared it. I followed the basic recipe on allrecipes.com, but tweaked it a bit. Would definitely make it the very same way next time! If you enjoy garlic and Italian-style food, this recipe will be right up your alley! (Oh, and did I mention that from start to finish, it took all of 25 minutes?!?)

1/2 cup butter or margarine (1 stick)
1/3 cup olive oil
1 teaspoon dried parsley
1 teaspoon dried oregano
6 cloves garlic, minced
1 teaspoon sea salt
1 1/2 tablespoons lemon juice
1/4 cup white wine
1 1/2 pounds chicken tenderloins (I happened to use these, because they were on sale for the same price as the boneless, skinless chicken breasts, but you could actually just use the boneless, skinless chicken breasts and cut them into 1 inch wide strips)

In a large skillet, heat the butter or margarine and oil over medium high heat, until the butter/margarine melts. Add the parsley, oregano, garlic and salt and mix together in the skillet. Stir in lemon juice and white wine.

Serve over pasta or rice. I used one pound of thin spaghetti, because I didn't have any angel hair on hand--this was more than enough for my family of 4.

Source: Adapted from allrecipes.com
Posted by Rachel at 1:46 PM 4 comments: 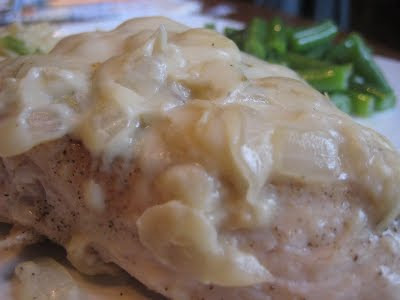 Anytime I see someone post a recipe that is a "quick weeknight meal" idea, I immediately jump on it--especially when it's endorsed by someone like Krista, of Krista's Kitchen! I have yet to try a recipe of Krista's that I have disliked! I actually intended to make this about a week ago, but had yet another "incident" with chicken I purchased at Meijer. It was marked "sell by April 30th" and seeing as how I was preparing it April 27th, I hardly anticipated my chicken smelling like rotten eggs when I opened the package. NOT a happy camper--especially because this was not the first time I've had a problem with their meat/poultry!

I have to laugh now (although I wasn't finding it overly amusing the night I made it), but looking back at Krista's post regarding the meal, she mentioned that her kids were not big fans of the "gravy". Ironically, my kids and I all really enjoyed the chicken, "gravy" and all (although I did put it sparingly on my kids' chicken)--it was my husband who didn't seem to care for it. (Not overly surprising--he's the pickiest eater in our home!) He thought the onion flavor was "too overpowering". Here's the thing...I fully admit that I've had onions that were VERY strong and while I happen to enjoy the flavor of onion, there have been times in which I've scraped off some excess, because it was in fact "too overpowering". By no means did I think the onion flavor was too much--it was actually a very mild onion. He kills me, too, because he asked me "are the onions cooked?". Ummmm...yeah...by TWO different methods! Not only did I saute them, but they were then baked within the sauce for about 25 minutes while my chicken was in the oven. (He even watched me take the chicken out, with the sauce covering it!) I love him dearly, but he drives me crazy sometimes!!! I've mentioned this in prior posts, but before we started dating (about 10 years ago), he literally ate the same 3-4 meal rotation. He NEVER would have considered eating onions before I started cooking for him, but he will eat them in certain dishes now. As far as this dish is concerned, I'm honestly not sure if it was more in his head, just because he previously had himself convinced that he didn't like onions and this chicken was obviously smothered in them. If he'd be willing to try it again, perhaps I'll try a Vidalia onion...doesn't get much more mild than that! In the meantime, I'm going to enjoy devouring the leftovers, all by myself :)

Just one more thing before I post the recipe! This potentially could be a fairly healthy recipe if you follow it according to how Krista posted it. I used what I had on hand, as opposed to making a point to pick up reduced-sodium chicken broth and fat free milk. (I'm awful, I know!)Chicken with Rosemary-Onion Sauce

Sprinkle chicken with salt and pepper. In a large nonstick skillet,
brown chicken in 1 teaspoon butter. Transfer to an 11-in. x 7-in.
baking dish coated with cooking spray.

In the same skillet, saute onion and garlic in remaining butter until
tender. Stir in flour until blended. Gradually stir in broth and
milk. Add rosemary. Bring to a boil; cook and stir for 2 minutes or
until thickened.

Pour sauce over chicken. Cover and bake at 350° for 20-25 minutes
or until chicken juices run clear. Yield: 4 servings.

Source: Krista's Kitchen (originally from Light and Tasty Magazine)
Posted by Rachel at 6:09 AM 1 comment: 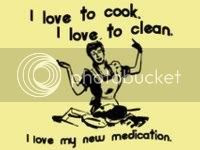